The Fly on the Blog 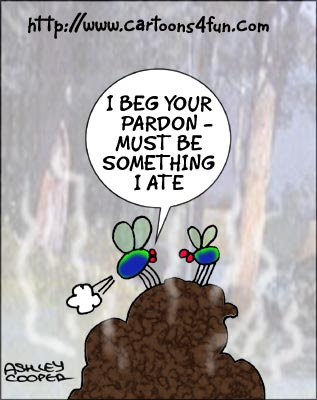 The Food Chain
In the dead of summer, a fly was resting on a leaf beside a lake. It was a hot, dry fly who said to no one in particular: "Gosh, if I go down three inches, I will feel the mist from the water and I will be refreshed."

There was a fish in the water, thinking, "Gosh, if that fly goes down three inches, I can eat him."

There was a bear on the shore, thinking, "Gosh, if that fly goes down three inches, that fish will jump for the fly and I will eat him."

It also happened that a hunter was farther up the bank of the lake preparing to eat a cheese sandwish. "Gosh," he thought, "if that fly goes down three inches, and that fish leaps for it, that bear will expose himself and grab for the fish, at which point I'll shoot the bear and then have a proper trophy."

You think this is enough activity for one bank of one lake? There is more.

A wee mouse down by the hunter's foot was thinking, "Gosh, if that fly goes down three inches and that fish jumps for that fly, and that bear grabs for that fish, the dumb hunter will shoot the bear and drop his cheese sandwich."

A cat luking in the bushes took in this scene and thought, as was fashionable to do on the bank of this particular lake around lunch time, "Gosh, if that fly goes down three inches and that fish jumps for that fly and that bear grabs for that fish and that hunter shoots that bear, and the mouse makes off with the cheese sandwich then I can have mouse for lunch."

The poor fly is finally so hot and so dry that he heads down for the cooling mist of the water.

The fish swallows the fly.

The bear grabs the fish.

The hunter shoots the bear.

The mouse grabs the cheese sandwich.

The cat jumps for the mouse.

The mouse ducks, and

The cat falls into the water and drowns.

The moral of this story is:
Whenever a fly goes down three inches, some pussy is probably in danger.

Jewish Fly
This guy walks into a bar, and sits down at the bar. There is a really good looking girl alone at the end of the bar. He catches her eye, and smiles at her.

She gives him an icy stare in return.

A little while later he tries again, and is rebuked. He calls the bartender over. "Listen, I'd really like to meet that girl, can you help me".

"Sure," says the bartender, "have you ever heard of Jewish Fly".

"No, is it like Spanish Fly", replies the man.

"Much better than that." Says the bartender.

The bartender mixes the girl a drink, (with the Jewish fly of course) and gives it to her.

A little later she smiles at the man. After a few more minutes and she began to lick her lips suggestively.

The man walks over, sits down and says "May I get you another drink?"

"No", she says in a deep sexy voice, "But you can take me shopping."

Q: How many flies does it take to screw in a light bulb?
A: Two, but how the heck do they get in there?

The Fly and the SAMURAI
Back in the time of the Samurai there was a powerful emperor who needed a new head Samurai so he sent out a declaration throughout the country that he was searching for one. A year passed and only 3 people showed up: a Japanese Samurai, a Chinese Samurai and a Jewish Samurai.

The emperor asked the Japanese Samurai to come in and demonstrate why he should be head Samurai.

The Japanese Samurai opened a match box and out pops a little fly. Whoosh goes his sword and the fly drops dead on the ground in 2 pieces.

The emperor exclaimed: "That is very impressive!"

The emperor then asked the Chinese Samurai to come in and demonstrate. The Chinese Samurai also opened a match box and out pops a fly. Whoosh, whoosh goes his sword. The fly drops dead on the ground in 4 pieces.

The emperor exclaimed: "That is really very impressive!" The emperor then had the Jewish Samurai demonstrate why he should be the head Samurai.

A gust of wind fills the room, but the fly is still alive and buzzing around. The emperor, obviously disappointed, asks: "After all of that, why is the fly not dead?"

The Jewish Samurai smiled, "Well, circumcision is not intended to kill."

I so stole The Food Chain. Bwahahahahaha. That's a really great one.

some good ones there! LOL!

You sure know the right jokes to steal!

And it's good to hear from you.

Always glad to spread some laughs to a funny critter.

I heard the samuri joke before. My brother loves to tell it.

It is a timeless joke that resurfaces in various forms.