When you're down and out, something always turns up - and it's usually the noses of your friends. - Orson Wells 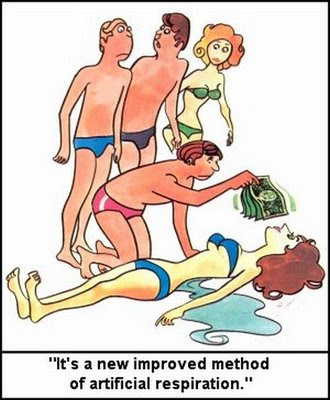 After marriage, husband and wife become two sides of a coin; they just can't face each other, but still they stay together. - Sacha Guitry

Woman inspires us to great things, and prevents us from achieving them. - Anonymous

The great question... which I have not been able to answer... is, "What does a woman want? - Dumas

I had some words with my wife, and she had some paragraphs with me.. - Sigmund Freud

"Some people ask the secret of our long marriage.
We take time to go to a restaurant two times a week.
A little candlelight, dinner, soft music and dancing.
She goes Tuesdays, I go Fridays." - Henny Youngman

"There's a way of transferring funds that is even faster than electronic banking. It's called marriage." - Sam Kinison

"I've had bad luck with both my wives. The first one left me, and the second one didn't." - James Holt McGavra

The most effective way to remember your wife's birthday is to forget it once... - Nash

You know what I did before I married? Anything I wanted to. - Anonymous

My wife and I were happy for twenty years. Then we met. - Henny Youngman

Communication In Relationships
A man wakes up in a hospital, bandaged from head to foot.

The doctor comes in and says, "Ah, I see you've regained consciousness. Now you probably don't remember, but you were involved in a pile up on the freeway. You're going to be okay, you'll walk again and everything. But something terrible happened."

"I'm trying to break this to you gently, but the fact is, your penis was chopped off in the wreck and we were unable to find it."

The man groans and fights back tears.

The doctor continued, "The good news is you've got $9000 in insurance compensation coming, and we have the technology now to build and to attach a new penis that will work as well as your old one did, and better in fact! But the thing is, it doesn't come cheap. It's $1000 an inch."

The man perks up at this and begins to feel better about his misfortune.

"So," the doctor says, "it's for you to decide how many inches you want. But it's something you'd better discuss with your wife. I mean, if you had a five inch one before and you decide to go for a nine incher, she might be put out and maybe even afraid.

But if you had a nine inch one before and you decide to go for the five incher, she might be greatly disappointed. It's important that she plays a role in this decision. Making that decision together will help you through this tought time."

The man agrees to talk to his wife. The doctor returns to his hospital room the next day. "So, have you spoken to your wife?" the doctor asks.

"Yes, I have," replies the patient.

"Has she helped you in making the desirable decision?" the doctor asked.

"And what is it?" inquired the doctor.

It was Henny Youngman who first talked about the dining out.

"Some people ask the secret of our long marriage. We take time to go to a restaurant two times a week. A little candlelight, dinner, soft music and dancing. She goes Tuesdays, I go Fridays."

I thought the link took in the previous comment. Oops, senior moment.

I guess Granite counter tops must be quite expensive - Probably more than just an arm and a leg!

I thought that dining out joke sounded familiar.

Thanks for the author of that quote.