What if Kal-el (aka Superman, dba the Man of Steel) disguised as a mild-mannered reporter kept a blog about his super-human deeds? The following is what it might look and read like. Then again, maybe not.

So, you think it's easy being a super hero? How would you like to spend one day in my red boots and blue tights?
Everyone thinks it's such a wonderful costume. You should have to pay my laundry bills! Do you know how much it costs to keep an indestructible super suit clean?
...And that stupid cape, it keeps getting caught in revolving doors! Have you any idea how many revolving doors there are in Metropolis?
Alas, I have no choice but to wear it. It helps to cover the buttons on the back of my pants. I might be a strange visitor from an alien planet, but I have body functions just like mortal men.

I was in a hurry once and forgot to button the flap which caused me an embarrassing moment.  I was giving Lois Lane a rooftop interview.  There was a gust of wind and she saw my bare butt. It was then that she coined the phrase "buns of steel." To this day, she still tries to peek under my cape.

I think I revealed too much about myself to her during that interview. I never should have told her about my X-ray vision. I noticed later that she started wearing lead-lined underwear. It was no big deal for a superman. Do you know how many attractive and sexy women who don't wear underwear there are in the city of Metropolis? A lot ... a whole lot ... thousands! 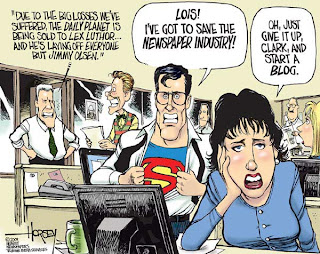 I'm sure some out there wonder why I, a super hero who fights for truth, justice and the American way, would even bother to keep a blog. I have to admit that it was Lois' idea. As it turned out, this blog gave me something to do when I'm not off fighting all the evil-doers and saving the planet from destruction.

I can use the blog to purge my thoughts. I can use this forum as journal of my daily exploits. I can even allow myself to be creative. Why, I can even compose poetry if I so desire. This is one of my favorites:


There once was a man from Krypton
Who escaped a planet's Armageddon
To become a hero who flies
And can use his X-ray eyes
To see whether or not Lois has a slip on.

You must think I live a "Life of Riley." Not really. Everything you earthlings take for granted presents problems for me. If maintaining a secret identity isn't bad enough, try setting up a bank account or using credit cards! The last thing I need is to be audited by the IRS.

You think you have trouble keeping up with the ever-changing technology? In an emergency or a crisis situation, just try to find a phone booth!

I don't want to hear about everybody's relationships and dating problems. I have plenty of my own. You might say they are super problems. When one is a celebrity, especially a super hero, their life is under a microscope. I can't be seen in the presence of a woman without fear of being caught on someone's camera phone or video cam. 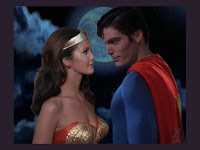 Take that time I was checking out Wonder Woman's ... ahem ... assets. Don't you know it ended up on UTube! I had squeeze 100 pounds of coal into diamonds before Lois would believe me that Wonder Woman and I were only discussing the golden eagle on her bodice.

Hey, I'm not the only member of the Justice League of America to hit on her! It was a sad day in the JLA headquarters the day she came out of the closet. That's right, she's a lesbian. It turns out though that she has a thing for Kryptonians.  She and my cousin Kara (Supergirl) are getting it on! How do I know this, you wonder? Heh-heh, did you forget about my X-ray vision?

For a super hero dating definitely has its drawbacks. I can't always carry my wallet. Of course, it can be a mere matter of perspective.

Then there is the matter of nutrition and of course, appetite. Some women don't seem to realize a super hero must eat properly to maintain his strength.

So, as you can see, it's not easy being a super hero. Sure, I can bend steel in my bare hands and change the course of mighty rivers. Yeah, I can leap over buildings in single bound, I'm faster than a speeding bullet and I'm more powerful than a locomotive ... but there's more to life than having all those powers!

After all I am a man. I have the same thoughts, desires and needs of any man! Yet, because I'm revered as a champion of justice, I have to live by a code of ethics. Just who made up those damn ethics anyway and why do they apply to only me?

Batman gets it on with Bat Woman. Green Arrow is sleeping with Black Canary. Green Lantern made it with Star Sapphire. Aquaman hooked up with Meara. Why am I given different standards to live by?

I do have to admit that Lois and I did go to bed together one night. Unfortunately our night of intimacy was not a voluntary act for either of us. It was all part of a nefarious act masterminded by my mortal enemy, Lex Luthor. He drugged and hypnotized her into wearing a nightie fashioned from fibers of a Kryptonite meteorite. While her act of removing the nightie and discarding it may have saved my life, our virtues were nonetheless compromised.

While I was occupied that night, Luthor and his henchmen pulled off a series bank robberies. The next morning with her still sleeping, I had to fly off to investigate the crimes and to deal with an earthquake in California. When Lois awoke, the hypnosis had worn off and she was left with no recollection of what had happened the night before.


I have tried on numerous occasions to have a return engagement with Lois, but she won't give in to my advances. She insists that she is saving it for her wedding night. (sigh) I can't tell her that 'we've been there and done that.'

Then there was the day that I flew a deadly virus into the sun to save the world populace from annihilation. Even though I was partially blinded from being in the sun's corona, I sped back to earth to pick up Lois for a special dinner I had prepared for her at my Fortress of Solitude.

I didn't know that I would gain a new enemy that day.
№ 2034
Curmudgeon responsible for this post: Hale McKay at 8:35 PM

eToro is the ultimate forex trading platform for novice and advanced traders.