Wetters to the Pwesident 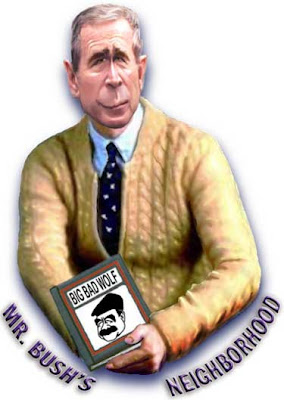 One day in the near future:

We interrupt this coverage of the Democratic Convention for an important message from the President of the United States, George W. Bush. This segment of Mr. Bush's Neighborhood is being sponsored by his good friends at Mobil-Exxon.

My felwow Amewicans and Wepubwicans, I'm sure you were disgusted that evewy station was showing those Democwats twying to pick the wight man to wun against my bwother Jeb as the next Pwesident.
....Yes, it wooks wike Hilwawey is going to be their man. Ha-ha-ha! Isn't that funny? Well, it's funny in Mr. Bush's Neighborhood! I find it funny because she isn't much of a wady anyway.
....Did you know that the Democwatic party has been weceiving thousands of wetters evewy day to wet Mrs. Cwinton wun for the White House? It's twue! My sources have wearned that Bill Cwinton sent evewy one of them!
....I ask you, do we weally want a man as a first wady? That just isn't wight! You think Hilwawey has ugwy fat ankles and calves? We don't need to see him in a dwess, do we? I guess she thinks it might make her wook better. Ha-ha-ha! Well, it's funny in Mr. Bush's Neighborhood!
....Before I continue, I would like to thank my speech witer, Bawbwa Walters, for witing a speech with little words that I can pwonounce. She took a wittle time off from kicking Wosie O'Donnel's fat butt. I gotta give her a wot of cwedit there, cause I wouldn't know where to start. That fat bwoad's all ass! Ha-ha-ha! Well, here in Mr. Bush's Neighborhood, we find that vewy funny!

I have weceived a few wetters fwom some school childwen adwessed to Mr. Bush's Neighborhood. I would wike to wead a few of them to all of Amewica. I hope some of those mean old Democwats are watching, because they might wearn something about Pwesidenting.
....Our first wetter says: Dear Mr. Bush, how come you still have not found all those Weapons of Mass Destwuction? My momma says there never was any?
....Let's see, that's from ... uh ... Jenna Bush? My, my somebody's gonna get a whooping!
....Ahem ...

Okay! Wet's see what our next wetter says: Dear Mr. Pwesident, We all know how you were an absentee member of the National Guard, when are you going to come cwean and admit that you didn't attend your Hooked On Phonics cwasses?
....I think that any kid who asks such hard-hitting questions should be hit vewy, vewy hard! We don't find that vewy funny here in Mr. Bush's Neighborhood either. Oh, the child has more to say: P.S. My momma says you are a dumb ass! If Jenna can send a wetter, so can I. - Barbara
....Waura! Waura! Who's side you on, anyway? Bewieve me when I tell you, that is not funny in Mr. Bush's Neighborhood!

Well, wet's see if we have another wetter. Ah yes, but first I'm gonna see who it's from first. Wet me say this, you have don't have to get up vewy earwy to twick me. How about that? The next wetter is from Mrs. Cwinton herself!
....She wites: Dear Dumbya, As you know, I am wunning for your office for 2008. I'll be wearing the pants in the White House soon. What do you think of that, you wying Wepubwican woser? -Signed Hilwawey Cwinton.
....Well Mrs. Cwinton, your wetter is not appweciated in Mr. Bush's Neighborhood! But I have an answer for you. If you get ewected as Pwesident, I'm gonna send your first wadie, Bill, a year's suppwhy of Cuban cigars. You won't find the time to wear your pants! Ha-ha-ha! Now that's the kind of humor that's funny in Mr. Bush's Neighborhood!

Amewica, if you will pwease excuse me, I have to go so I can continue my war on terrorism. I will fight for twuth, justice and the Amewican way. Up! Up! And way beyond the wimits of my powers.

....And who disguised as a manic mannered President ...

No.881
Curmudgeon responsible for this post: Hale McKay at 12:16 AM

Good posts.
Thanks for the card link that you posted in your last post. I sent them once a long time ago and lost the link when my computer crashed.

I didn't know that Hilwawey had fat ankles and calves, can't do much with the ankles but fat calves should bring a good dollar.

Very funny! And I'm sorry I missed commenting on your Bible Test post - I know the Bible fairly well and that was absolultely, laugh-out-loud hysterical!!!